Mid 2002 during school, I created something.

At the time it was just a crude design that I drew on a headband and wore quite a bit.

At the start I had no idea what F2thaK would become. (Say "F to tha K")

Around 8.30am Saturday the 14th of December, my father awakened me to a phone call. It was my friend Drew; it sounded as if something wasn't right. He said with such a dread that one of our good friends, Michael, had been killed in a car accident. I couldn't believe it. Michael was a great friend and a true gentleman. The last time I saw him was a few weeks earlier, when him and I were at our friend Luke’s house.

Michael’s funeral was on a clear day. I arrived, saw some friends who I chatted with for a while before deciding to go into the viewing. My timing was perfect; as I entered the church, the undertakers were putting the second screw into the coffin lid. They asked me if I'd seen him yet and I replied, "No."

They stopped, took the screws out and lifted the lid off so I could say goodbye to Michael. He looked strange lying in the coffin in his hoodie; hands crossed, eyes closed. He looked like a ceramic doll and he looked so peaceful. I thanked the undertakers and they carried on.

After the service, I went out to the cemetery with Drew. When we arrived, Michael’s coffin was above his final resting place. We gathered around, the Reverend said the last words of prayer and everyone put flowers on the coffin. After everyone had finished doing this, they lowered the coffin about 3 feet down.

Everyone left gradually after this. Luke, Guy, some other close friends & I stayed to say a final goodbye. We talked about the situation amongst ourselves including Michael, and watched as his coffin lowered to its final resting place. As he descended, I threw my F2thaK headband ontop of his coffin, as I was wearing it at the time.

I dedicated F2thaK to Michael's honour, he deserved so much more of a life. This made me realize we need to live every day to the fullest, as we never know which one is our last.

Since beginning, F2thaK has grown; and will continue to do so. We will never stop living.

live life your own way. 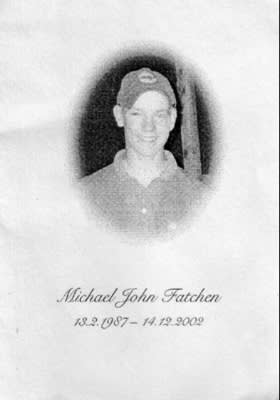